There is a theory in political science that we operate under an implied Social Contract, that is our moral and/or political obligations are dependent upon an agreement among us to form the society in which we live.

That contract can include an implicit agreement that we will cooperate for the social benefit which may entail sacrificing some individual freedom for general protection.

I think we’ve all seen the ways those two spheres clash during the COVID pandemic & ensuing mask backlash. [I’d attribute that conflict mainly to poor leadership, but that’s another post for another day.]

Theories of a social contract became popular in the 16th, 17th, and 18th centuries as a means of explaining the origin of government and the obligations of “subjects.” [Another aside: don’t even get me started on how people aligned both sides of the political divide seemingly LOVE to act like subjects when, if you ask me, that’s totally un-American.]

Thomas Hobbes was the thinker behind the notion of natural law which got humanity to the place where we believe that everyone has the right to everything. (American Revolution, anyone?).

Hobbes thought that self-preservation is rationally sought by communal agreement with others. He explained the social contract as being:

“[T]hat a man be willing, when others are so too, as far forth as for peace and defence of himself he shall think it necessary, to lay down this right to all things; and be contented with so much liberty against other men as he would allow other men against himself.”

John Locke was an English philosopher, widely regarded as one of the most influential of Enlightenment thinkers and commonly known as the “Father of Liberalism.”

And if you’re a Conservative reading this, don’t get your bloomers in a bunch. Liberalism, in its original meaning, is a political and moral philosophy based on:

You might see something familiar in his rejection of divine right, or his idea that – by nature – people are free and equal against claims that God made all people naturally subject to a monarch. (Jefferson looks up from The Declaration of Independence.)

Locke argued that people have rights such as the right to life, liberty, and property. (Jefferson nods along.) He considered those rights as having a foundation independent of the laws of any particular society. And he used the claim that people are naturally free and equal as part of his justification for legitimate political government.

To Locke, government could exist as the result of a social contract where people conditionally transfer some of their rights to the government in order to better ensure the stable, comfortable enjoyment of their lives, liberty, and property. Since governments exist by the consent of the people in order to protect the rights of the people and promote the public good, governments that fail to do so can be resisted and replaced with new governments. Ring any bells about why we have periodic elections? 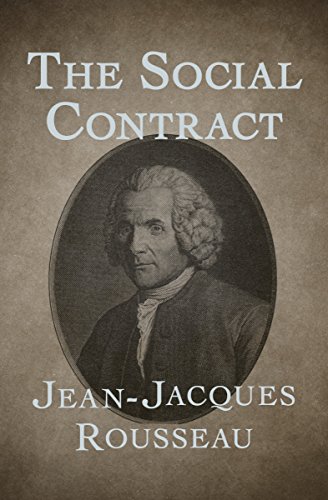 And Jean-Jacques Rousseau, quite literally wrote the book on social contract, The Social Contract. [click the image to get a copy]

In the book, Rousseau asserts that only the people, who are sovereign, have the all-powerful right to rule. Rousseau considered laws as binding only when they are supported by the general will of the people.

It’s imperative to understand this notion of what role we all play in society… because HOLY COW DO WE NEED TO CONSIDER THESE THINGS, EXAMINE THEM, AND BE MORE CONSCIOUS OF THEM.

Because there’s been a breach of contract.

I grew up thinking the breach was from people with a certain mindset. After awhile, I noticed, a set of behaviors became associated with that mindset. Certain styles and types of music became targets of disgust for the people I grew up around. Race followed soon after, narrowing the blame in people’s eyes.

During my studies, I also became more and more aware of the same phenomenon in other groups. It was a good dose of perspective that encouraged me to look beyond the categories people were put in, and look at the effects of their actions and views they promulgate.

[Now, in my 30s, I know that the real contract-breakers are the people who listen to their music out-loud on the train, take up 2 parking spots, and don’t return their shopping carts.]

I know that many evangelical republicans don’t think people on “the left” share their values, like about family or fidelity or fiscal responsibility, because they were told so by Rush Limbaugh or their pastors. People on the left assume “conservatives” are bigots. This immediate judgment precludes finding a common ground on which to build.

And, I must say, this issue becomes painfully personal for me… I’ve LIVED exactly how damaging conservatives rejection of their supposed “loved ones” can be. I’ve seen firsthand how breaking one side’s opinion of how things should be justifies, in their minds, additional breaking of the bonds that should tie us together.

I’ve heard “conservatives” say, essentially, that things like marriage equality feels like a breach of the social contract. Their lives don’t include those things, so “their” society shouldn’t either. And I think we’ve seen a magnified version of their rejection of Others play out during the rRump presidency.

Of course, I think they’re wrong (and not just bc I’m romantically and in-practicality committed to another woman).

I think the very promise of America opens the door to freedom to be who you are, and also the freedom from being compelled to be something you’re not, whether that’s being a Christian or being gay or being racist. And extending equal rights is not “forcing” anything on anyone – there’s a difference between opening the door for people and slamming it shut on them.

The fact is: We have to establish how we want to situate ourselves in society and let the government follow. We have to decide what is and is not worthy of being part of our lives.

The responsibility lies on each of us. A social contract reveals itself in action because, as I’ve said before, No Law Can Save Us. We Have To Save Us.