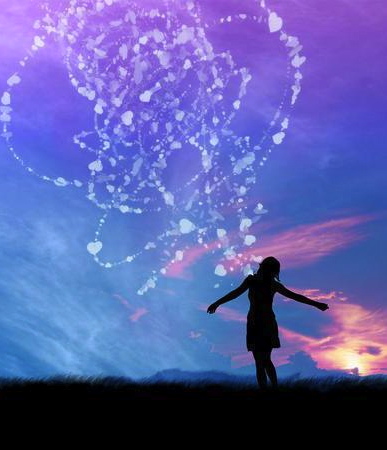 Ancient texts and religious writtings speak of it.

Poets, gurus, and sages have espoused the good news of it for thousands of years.

Books and movies have been written and produced about it.

Songs have been sung about it, and people have made a fortune teaching it.

But do you know enough about
it to use it?

I’m talking about the Universal Principle most commonly known as The Law Of Attraction, which may be the most powerful force we can harness.

The belief is based on the idea that we and our thoughts are both made from pure energy, and that “like attracts like”—that is, that we have the power to create our lives by tapping into the “vibe” that corresponds with what we desire.

At the most basic level, the practice goes like this:

So, predominant thoughts & underlying beliefs that drive our actions become incredibly important to pay attention to. It behooves us to become aware and conscious of what is going on in our minds!

This has been in practice, in some form or fashion, for millennia—you can see it in various philosophical and religious traditions. In particular, it has been inspired by Hermeticism, New England transcendentalism, specific verses from the Bible, and Hinduism.

Hermeticism influenced the development of European thought in the Renaissance. Its ideas were transmitted partly through alchemy, the medieval forerunner of chemistry, based on the transformation of matter. This later led to the Transcendentalist movement in the United States immediately before the emergence of New Thought.

George Ripley, an important figure in that movement, stated that its leading idea was the now-commonly-used phrase: “mind over matter.”

Many practitioners often quote certain verses from the Bible in the context of the Law of Attraction, as well as teachings of foreign visitors who shared their cultural approach to the principle. An example is Mark 11:24:

“Therefore I tell you, whatever you ask in prayer, believe that you have received it, and it will be yours.”

And in the late 19th century, Hindu Swami Vivekananda taught the importance of the realization of the best and strongest powers within oneself. He once said:

“[I]t is being and becoming, not hearing or acknowledging; it is the whole soul becoming changed into what it believes.”

Wallace D. Wattles, author of The Science of Getting Rich, stated:

“There is a thinking stuff from which all things are made, which, in its original state, permeates, penetrates, and fills the interspaces of the universe. A thought in this substance produces the thing that is imaged by the thought.”

James Allen wrote his famous As a Man Thinketh, in which he tells people:

“[M]ind is the master-weaver, both of the inner garment of character and the outer garment of circumstance, and that, as they may have hitherto woven in ignorance and pain they may now weave in enlightenment and happiness.”

As it is in Nature, and as we are a part of Nature, the most powerful forces of humans are our invisible forces, that is, spiritual force. And the only way the spiritual force can manifest is through the process of thinking.

Thinking is the only activity which the spirit possesses, and you want to live from your spirit (I know I sure do). Thoughts, reasoning, & ideas are spiritual conceptions. Questions are spiritual searchlights. Philosophy, spiritual machinery.

Thinking will get you there… if you turn your mind into the vehicle.

Let your imagination do big things for you. You’re still the curious child who conjured up panache and dreamed big… you just got: bigger; some answers; & a different set of concerns. And, now, you have the ability to maturely guide your mental energy to create the type of life you want.

I won’t claim to know all the answers. I can only share things that have helped me as I’ve navigated life. Below, you’ll find some suggestions—try them all, pick a fave, or bookmark this page and come back as you master one and get ready for another Level Up (links will open in a new window):