I hate what we do to our brothers in this society… disconnecting them from their emotions, destroying their psyches with the subliminal messages of what being kind, hurt, or otherwise “vulnerable” mean about manhood… And I say this as a big sis to a boy about to step into puberty in a hotbed of stereotypical gender roles & destructively undermining socialization. A place where you hear people tell their infant sons to “man up” when they’re “being a girl” – you know, being hurt or crying when they don’t have the words to express themselves.

[Plus, I take offense to that, like you💪🏼wanna🤘🏼see✊🏼what✍🏼girls✌🏼do🤙🏼?? Hint: it’s everything. Stop perpetuating the notion that girls are less-than.]

I’m no parent, and I’m not perfect, but I’ve spent time around kids and was a tiny human once (We’re All Kids Who Got Big), and I’ve seen things that work and things that don’t.

With my nephew, who is what they’re now calling a “three-teen” & super bright, all it takes is asking what’s wrong, quelling the irrational reaction and tapping into the thinking part of his brain by asking what it’ll take to fix it. When it’s something that can be fixed, we can work together to get the result we want. If it’s emotional or ego, it’s an opportunity to talk, still acknowledging the emotion, and create a better brain pattern than meeting the original emotion with anger or negativity.

And this is not even an emo, liberal, sissified plea for compassion. It’s rational handling of irrational emotions, and one step more-aware, productive, and measured than repressing or otherwise denying that emotions are a very real part of the human experience.

That’s how my grandpa provided me with emotional leadership. He was patient without kowtowing. He was there without validating whining or irrationality. And tell me THIS guy is some New Age, bleeding-heart, kumbaya singer: 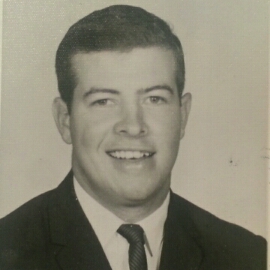 It makes me sick and sad to see kids become outlets for their parents’ insecurities, to be incompletely developed, to be repressed and stifled and forced into compliance… and in no way am I advocating, as George Carlin would put it, child worship. That’s equally unhealthy.

And, no, that’s not weak or emotional. That’s considerate, healthy, what a friend would do, an acknowledgment of truth…

…because, yeah, sometimes we have feelings about what’s going on. ALL of us, regardless of gender or race or belief… it’s part of life, especially when you’re young and experiencing these mental processes for the first time. Emotions, thoughts, feelings – they’re all part of us. And by acknowledging them, we can do something useful with them.

They’re definitely not something to ignore. And it feels imperative, with that, to say: IGNORING AND SURPASSING ARE NOT THE SAME THING.

As kids, we experience things for the first time EVER. Do you remember the first time you tried something? Maybe you were nervous or shy, not wanting to make a fool of yourself, unsure about what exactly it was you were doing? (Somebody, somewhere, just had a flashback to losing their virginity…)

Now, imagine somebody makes you feel like crap about that first experience. They ridicule you, demean you, or otherwise create a negative association with that experience in your mind. Imagine if that was a very personal and dear feeling. Imagine if your naivety or pure curiosity being met with disrespect or discouragement.

Imagine getting no leadership for healthy identification of emotions and their management. Imagine not being seen, heard, understood… feeling worthless. Isn’t that what it feels like when people don’t pay attention or consider you? Don’t you think that has an effect on a person?

Those people pick up tiki torches and march around shouting their fear of being replaced. Imagine if they had been given better emotional and intellectual guidance.

Our boys get an unhealthy sense of what it means to be men. And no matter the age, they ARE just boys… boys who got big… boys trying to be men, to live up to the role they were told they had to play to be accepted.

This toxic misunderstanding of what’s valuable and worthwhile has warped our thinking and our relationships. Example: that athletic prowess, somehow, makes a person more or less valid. And the savage “tough” attitude that goes along with it; miscreant aggression that transcends gender. Teeth-gnashing mothers and belligerent fathers screaming at their kids over a GAME. Personal value wrapped up in little league outcomes.

Meanwhile, the spirit of the game, the cultivation of a love for tactic and sportsmanship, the truly valuable aspects of sport are lost beneath the imbecility.

And that’s coming from an athlete who saw the outright grossness of the culture, succumbed to it at one point, observed it at Brother’s games as an adult… But, just like with emotions, we shouldn’t write off sport in general, but take a lesson from it about developing healthy relationships and emotional coping skills.

In the same way that the aggression of sports has a place, so do the love and the curiosity and the vulnerability that lie within ourselves… our brothers, our boys, our men, included.

And I only have my own personal experience to offer, having a little brother, but also seeing the effect that a little brown girl can have on the life of an older, white guy who share very little at first glance, but were bonded by genetics and love.

My grandpa was my buddy. We hung out like friends, enjoyed baseball together, didn’t do “sissy” self-expression but just talked ABOUT stuff while we threw the ball around or fixed stuff around their house. This relationship changed us both – he learned how love can strengthen you; I learned how little demographics mean to the heart. Because of my kid-ness, relentless question-asking and exuberance, he gained access to those feelings within himself. With that, he could explain things about life that may not have had context without that initial openness. As we continued the cycle, we built trust and expanded parts of our minds that may have otherwise gone unexplored or stifled.

My Papaw was my first “boy” — the light that shined through his eyes when we were tickled about something funny or mulling over ideas was ageless, timeless, something so transcendentally pure I still see it clearly in my mind & can remember what it FELT like to see/recognize/behold. And having seen that very same *thing* from the very day it came into this existence in my brother… it’s palpable.

Let me tell you, my big sister lioness ROARS for our boys… that they should be nurtured, encouraged, taught to be assertive but good-natured, strong of character and kind… and loved.

This is the theme of today’s post. When we experience violence and mass casualties in our country, I get sad and reflective and dig into cures for the causes… I have been incredibly lucky to know some amazing members of the male species — my brother @iam.bryce, my cousin @jakewewe, and our Papaw… they have shown me how boys show love; and the amazing capacity that men possess to be strengthened by the ability to be in touch with their emotions. I’d like to think it’s because we loved them, gave them a chance to say “I feel ___” and then pass through those emotions, “good” or “bad”, so that they won’t fester. Because we see what happens when we don’t give our boys emotional leadership, when we’re harsh with them and force them to wear masks that don’t acknowledge them as complete humans. I’m so proud of the boys in my life, that they’re athletic and confident while still being kind and cute.