Jelaine and I have a friend named Laurence.

Laurence is awesome and funny, typical of the Englishman sort he is. He’s kind, but he’s a former marathoner, rugny man. He’s a great conversationalist, but he can also just kick back and have a Guinness. No fuss. No friction.

The Christmas card of him and his daughter is on our fridge forever. Needless to say… We love him. She loves him. I love him. He’s our concert-companion big brother.

And that’s exactly the feeling i get around him (and most of my other favorite people): that unadulterated sense of just BEING. 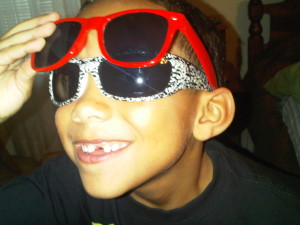 My blood-related brother, as an infact, loved to rub the back of his hand against my forearm when we’d sit next to each other. He still unconsciously does it.

I watch my Brother Bear do and say things that are merely the teenage versions of things he did as a kid, and can do nothing but smile. No matter how big he gets (and he’s not that much shorter than me now – AHH!), there are some things that don’t change.

No matter how old we get, we don’t stop being ourselves. Some things may change. We might age, go through tough time, improve, achieve, move up socially… but we never stop being kids.

My Papaw showed me that very early on. We were separated by decades and some pretty opposite demographics, but we were thick as thieves. We were just… pals.

I can remember seeing a picture of a young Papaw and recognizing something more than just his face. And I remember telling him, in a non-weird “I don’t know really know what I’m saying” kid way, that he was that little boy to me. He wasn’t all his outward characteristics – he was, no matter his age, a sweet ol’ country boy who just liked to hang out and have a catch, maybe talk about some stuff, fish, play with the dogs…
And we did those things A BUNCH.

At his dad’s (my Poppy’s) funeral, he removed all the pretense of adulthood I had. He was sad, obviously. I didn’t think men, especially not grown-up men, cried.

But he was crying.

I don’t remember what i asked him, but he answered that he was sad and that he loved his dad. And it hit me, very poignant for a kid, that he had grown up… and so had his daddy… and he had a whole lifetime of experiences, and he wouldn’t have his dad any more.

And that thought changed me.

I handed him a Kleenex, and patted his back, resolved to love him like he was that little boy from that day forward.

And I’ve looked for that same thing in people throughout the years. I love seeing pictures from peoples’ pasts for that very reason. I like meeting peoples’ parents, because it fills in an important emotional piece that I can’t even explain.

Thinking of others as grown-up children makes me so much more willing to love them and find out about how life has been foro them. It helps me be patient and compassionate. Because, if we have no other commonalities, we are = after all – just kids who got big.