I heard the term genetic evolution in a video that autoplayed after a TEDtalk I watched on YouTube. So, I looked it up, did some reading, and came across “evolutionary genetics”–the study of how genetic variation leads to evolutionary change.

It made the lightbulb click about why we have unconscious bias

I’m no biologist or geneticist, so I’m not going to get into it. And I’m more interested in the theory’s divergence and creative aspects in general, so cool your jets if evolution talk makes you upset. I’m really more interested in the changes that result in different species (or outcomes–you’ll see why I say that), which this picture represents:

I’m fascinated with that process, and it’s a pattern that ideas, beliefs, even words themselves follow.

Many linguists believe all human languages derived from a single tongue spoken in East Africa around 50,000 years ago. They’ve found clues scattered throughout the vocabularies and grammars of the world. [pauses to collect brain, because that blows my mind]

You ever play a game of Telephone? Everybody lines up, and the first person in the line whispers a message to the ear of the next person in the line, and so on, until the last player is reached. The last player then announces the message to the entire group, and the first person compares the original message with the final version.

Although the objective is to pass around the message without it becoming garbled along the way, part of the fun was always seeing how the message got changed. That part was especially fun for me because I was the one who [usually] purposefully changed it.

It’s easy for me to imagine how messages can get changed from language to language as they travel across the entire world. “Your feet smell like cheese” going around a bedroom isn’t anything compared to “(major life principle)” going from Mesopotamia circa 47BC to 2012 Seattle, WA. Or Afghanistan to Memphis today.

It also follows that the brains of the people whose life circumstances have taken them down different and diverging paths will also have considerable distance between them.

Imagine the “distance” between a white man born in 1943 rural Texas and a biracial girl born into 1980s suburbia. Well, j know what kind of differences in opinions and views those two would have–I was describing my Papaw & me. (I also know how personal connection overcomes those differences). Now, take that image into consideration & let’s take a second to imagine how a man on the West Bank in his early 30s may see the world as compared to you, or a 6-year-old girl in a farming community in Brazil, or a 50-year-old in Haiti.

They may live drastically different lives, and have conflicting views, but–who knows–maybe they would find a kindred spirit amongst the group. Maybe they would connect on a deeper level should their paths cross.

[Sidenote: take a second to consider the fact that Arabic and Hebrew are read right-to-left, not left-to-right like we’re doing right now–imagine how a brain’s structure & programmjg are affected by that little detail.]

Now, imagine the minds of two siblings who grew up in the same household, went to the same church, attended the same schools, and had all those familial similarities. What if the family moved to a drastically-different state during the siblings’ childhood? What if the older sibling was beaten by an alcoholic parent before the other was old enough to know what was going on? What if the younger one was a rebel at heart? What if they went to different types of colleges–one to a Baptist college, the other to art college–or, remove college from the picture completely. There would, likely, be a considerable diversity-created distance between those two minds.

All sorts of things create mental distance between people from all walks of life. I used to think beliefs and thoughts created more distance than actions, then I fully realized that everything– everything — begins with a thought and (epiphany chorus, lights shine on face).

That being said, the mental distance between us can be surmounted if we decide to do. That decision starts here. 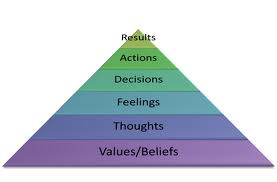