Bill Walsh, the famous football coach, wrote a book titled The Score Takes Care of Itself: My Philosophy of Leadership.

Today, what would have been his 86th birthday, I’ve gotten a copy of the book & am gonna see what lessons I can learn from the legend.

Sidenote: I said the title of this post, a few days ago looked it up to see if it was already a “thing” & the book came up. Seemed kinda perfect so close to Coach’s birthday.

Coach Walsh knows a little something about leadership. He coached many successful teams, while developing talented coaches who went on to lead other successful teams. Check out his web of influence: 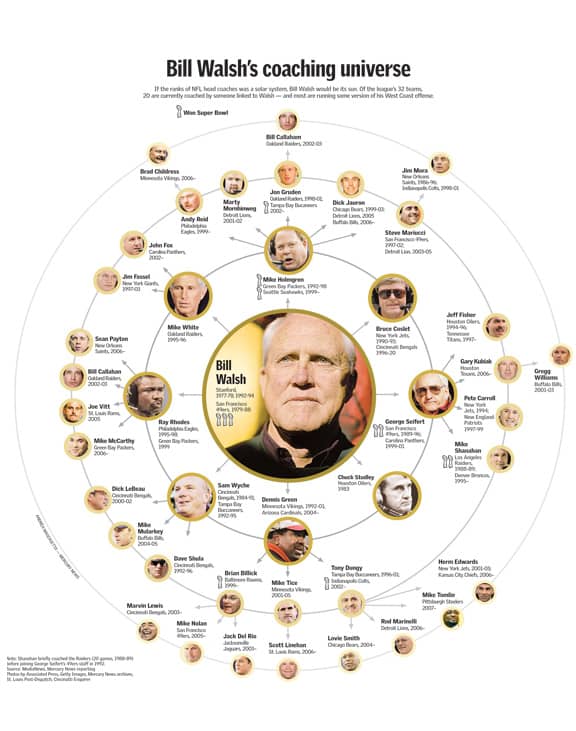 Bill Walsh embodied the essence of Concurrent Good in a transcendental way–the winning mindsets he created were able to cross decades, generations changes in the game itself… he sent successful ripples into the future. That’s prrrretty amazing.

But, how did Bill Walsh create those ripples of success? I’ve got a guess from the cover alone…

He did the right thing in every moment.

Coach Walsh had to balance coaching staffs and rosters. He had to understand the game of football just as much as he did human psychology. He had to tap into aspects of the human experience that reached deep into the lives around him.

Then; he had to direct all of his people & their efforts to a central goal, the thing about sport that never changes, the reason one takes up competitive ANYTHING:

When you take away all the other nonsense, the goal remains the same. The goal of entering into competition is to win.

The specifics of what it takes to win may change, but going out and finding a way to win doesn’t.

Read on for what focus means…

Focus helps us decide what matters. After that, we can shift attention to those things. It’s this ability to align resources with the larger goal while focusing on daily progress that produces desired outcomes.

Think about it this way: If you were attending college right now, what’s the simplest goal you might have?

You might answer, “Graduate.” Simple enough. That’s all I thought about my entire senior year.

But graduating isn’t really a goal; it’s the result of surmounting many smaller goals. I broke down “Graduate” into smaller goals without even realizing it–I had attendance expectations, standards for taking excellent notes or having adequately prepared for class…

The same happened on the court: there were games that we’d be down a few points, staring down the barrel of losing a set, and our coach would say something like, “Let’s just work on getting a side-out.”

All we needed to do was get the ball back in our possession. That was a point right there.

It only goes point by point. So, that’s all we could worry about: each point as it happened.

Committing all your energy to each step, rather than wasting it on what was or what might be, makes the results inevitable. If you work according to your system and focus on what moves the needle forward RIGHT NOW, you’ll come out on top.

The score will take care of itself.