That idea has kept coming to me… just in different ways, over & over. And here’s what it feels like… I’m gonna try to get it into words: 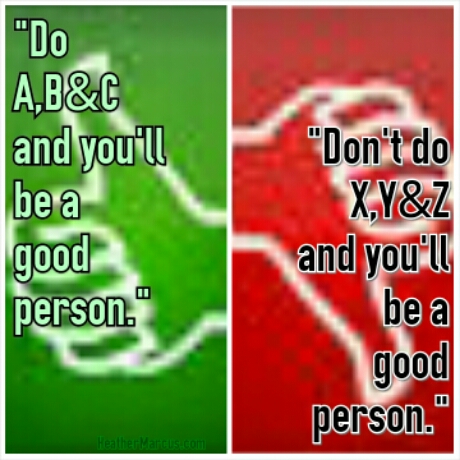 Take, for example, the hullabaloo about saying “Merry Christmas” vs “Happy Holidays”… I watched a lady have a meltdowna few years ago, because some guy told her the latter. He seemed like a with-it dude, so I chased him down to ask, basically, why he said that instead of saying, as the lady put it, “the thing everybody should be saying.”

He was just trying to say a nice thing to a stranger & continue on with his day. Besides, he said, he didn’t want to assume she celebrated Christmas & it’s customary, during the month of December, to say something when you depart.

He was trying his best to honor the spirit of the season & the social norms. The lady, she probably felt, was doing her best to honor another tradition.But, just because he didn’t say it the way she wanted, she took it is as a negative.

I was disgusted by the lady, at first–a typical response from me to that sort of reaction–and then I was so bummed that SO MUCH of these human interactions happen because of the distance between ‘send’ and ‘receive’.

These good things that so many of us hold so dear get turned into such UGLY things, and it’s really served absolutely no good.

What do you call what we’re doing here? How do you think we got here? What are we supposed to do while we’re here? What words do you associate with all of it?

Aren’t many of the religions based around following the example of a leader who dedicated their life to being a prime example of what it is to honor their creator?

Doesn’t it follow that THAT’S the thing to do? YOU be the thing you’re supposed to be. Make YOU–your beliefs, your shoulds, your best example–happen.

Would any of the bodies of the threefold mind/body/spirit models (eg, Zoroaster or Jesus or Muhammad) cut down someone whose views didn’t align with theirs? They were too busy setting the example of how TO BE. Wouldn’t hate, ugliness, or selfishness defeat their blamelessness?

Isn’t the purpose of Christianity to be Christ-like,to win people over by being a great guy or gal, not to destroy for Christ? Can’t we draw parallels with the notion of karma?

The “Happy Hokidays” guy was insecure about offending.

The “Merry Christmas” lady was probably one of the MANY folks insecure about the rumor so-fraudulently-perpetrated that there is an attack on Christianity.

I get insecure about being me in a world that feels similarly hostile, so I write these posts, share my ideas, do the work I do. (I used to lash out & look just as dumb as that lady looked to me.)

Some people drink to numb or drown their insecurities. Other people beat their spiuses or kids. Others put on a great *show* to keep people from truly seeing them.

We’re all talking about insecurity, just in different ways.

But, guess what, exposing our vulnerabilities is brave.

Being open & honest is brave.

And what you give, you get… facing those perceived negatives turns us to the positive. And if we all started turning toward the positive–whooo–can you imagine?