So much diversity is SO MUCH OF THE SUCK.

Plenty of people have plenty to say about inclusivity and diversity. Some of their hearts are in the right place. Some are poser diversity speakers, just trying to make a buck off the field.

I wish there was a way to measure their effectiveness. Cuz it doesn’t take a PhD to see we need a paradigm shift when it comes to how we all deal with, think about, etc. each other.

You can talk about all the SHOULDs and say what sounds good til the cows come home. But all the ideals in the world mean diddly-squat if they don’t actually come to fruition.

I see people being aggressive about it (I’ve been guilty of that). I’ve seen people make appeals to our better selves. I’ve seen scolding and praising. Here’s one tweet I saw just the other day:

I am constantly trying to make others better. But you can’t fix people. You just have to be inspiration for change.

you can’t make people change. you can only love them & hope it’s enough to help them see…

Sure, their hearts and minds are in a good place. And they’re doing a lot better than our more prejudiced counterparts. But, they’ll never get diversity results with that. Why? The implication is that the person has to change. If they’re not on the diversity train, they’re broken and need mending. There’s an accusatory tone.

Effective diversity techniques are hard to come by. But it really doesn’t have to be so damn difficult. It’s not rocket surgery. It’s just being a friend.

The C.S. Lewis quote about friends being the ones who go, “What? Me too!” is so spot-on. Finding the “Me Too” Moments can make all the difference when it comes to turning strangers into friends, getting along better, having more empathy by seeing ourselves in others… all that jazz.

It’s how, this past Sunday [Funday], I chatted with an adorable boy/girl couple, a dude who was either a stunt double on ‘Duck Dynasty’ or in a ZZ Top cover band, a Muslim guy who made candles, a tennis-playing lesbian… it was kick-ass! We found where we overlapped – the conversations were as shallow as joking about the place we were at (the Double Wide) to the impact of children on a relationship.

(Although, there ARE  times when it’s neveaaaey to go “Nuh-uh”… but I’ll get into that opinion another time.) 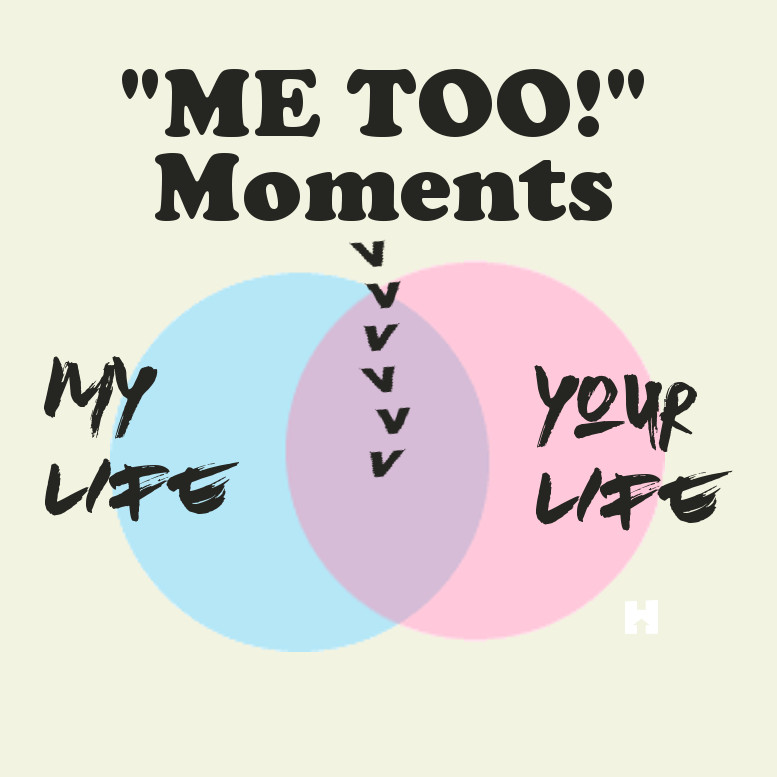