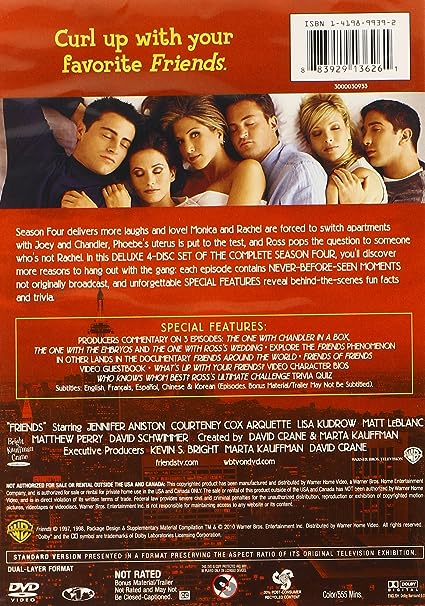 Today on Twitter, there was a top story spawned from @thetedfox‘s serious question about the F*R*I*E*N*D*S Season 4 DVD cover:
“Why is Rachel the only one 👀?”

A bunch of the responses were what you’d expect: “Because Chandler is spooning her.” “She’s the only one who’s woke.” “She just realized she can’t afford that apartment.” And a few made me chuckle, then go, ‘Well, THAT would have been good…’ (“They were dead the whole time.” “The show was an allegory about social justice.”)

So, in the spirit of LOVING to be reminded of things I wondered 10+ years ago, along with nostalgia and an abiding love for that show, I’ve come up with a few theories of my own.

Why Rachel is the only one 👀:

Now, let’s talk about why she’s the only one reclining on the Season 5 cover. Found your peace, didjya Green??
Well, this was a fun exercise. Thanks, Ted Fox, wherever you are 900 miles from Fenway.