If you missed the Charlatan-In-Chief’s news conference today, you missed a lot of flash and very little substance. a sentiment that a CBS post-game analyst echoed, noting that it was more of a performance than a way to convey information “much of which was incomplete or incorrect.”

Guess it was an Alternative-News Conference

But that was to be expected from a know-nothing showboat whose back must ache from shilling so much bullshit.

The US-recipient-of-the-most-Electoral-College-votes did more ducking and dodging than Sonny Liston, and couldn’t seem to conjure any straightforward answers to the questions posed.

He complimented himself plenty, like when a reporter asked about his relationship to the Jewish community; the Blowhard called himself “the least anti-Semitic” and the “least racist person”… because, you know, he IS the ultimate source of information and will not be questioned.

It wasn’t hard to miss the blatant ignorance, like when he asked veteran African-American journalist April Ryan if she could help set up a meeting between him and the Congressional Black Caucus, asking her, “Are they friends of yours?”

You know all black don’t know each other, right?

It was also almost-impossible to miss what WASN’T there:

There was no accountability for his national security adviser’s disgraceful resignation (read about it here on the “failing New York Times”). No, he wanted us to remember that Hillary Clinton was given the chance to review debate questions. And her emails… Killary had emails… Dude, didn’t you win the election?

Instead of talking about the issues, like the Russian spy ship off the shore of Connecticut or what he intends to do about helping the inner cities, he would re-direct the conversation to “bad people” coming into our country and the typical insincere soundbyte bullshit politicians do. Oh, and don’t forget that he, the figurehead of the party whose members talk so much shit about liberals being sensitive snowflakes, gets picked on by the media. They reported stuff that’s true, but makes me look bad… They’re mean to me… The news is so full of hate… Wahhh…

And the lack of respect demonstrated to the newspeople in the room AND to the American people… whew, that was the only astronomical thing about this news conference. (Can we even call it that? “Attention-grabbing desperation circus act” seems better, but doesn’t roll off the tongue…)

He rolled his eyes like a petulant teenage girl. He called the press names right before he called on them for the next question. He whined. He blamed. He dodged (and rather clumsily).

And, to top it off, he exposed what a sensitive ballsac ninny he is when he wanted only good questions” and “nice questions”—aka: those that were flattering, un-challenging, or otherwise uncontroversial.

Why would we talk about controversial ties to Russia when Melania just re-opened the Visitors Center at the White House? I’m soooo sure she had a direct hand in doing that. Give me a break…

If you missed the news conference today, count yourself lucky… your brain wasn’t polluted by its inanity and insanity.

The latter of those may be the most frightening thing about all of this: people will undoubtedly take the bait, take their eyes off the ball, do the same stupid thing they’ve been doing for centuries, and pick up their shovels to help toss around the #trumplogic horsecrap.

And, before you think I’m just being critical, peep this:

Nearly 60,000 mental health professionals have diagnosed The Orange Nightmare with a type of insanity that is often compared to an alcoholic’s lack of honesty and impulse control. Sparked by Change.org petitions by a top former Johns Hopkins professor and a California congresswoman, the psychiatric community has declared that Drumpf suffers from “Malignant Narcissism.” Google it. Read it here.

Malignant narcissism is a syndrome characterized by a narcissistic personality disorder (NPD), antisocial features, paranoid traits, and ego-syntonic aggression (getting mad when people think you’re the problem… because everyone else is the problem!).

Other symptoms may include an absence of conscience, a psychological need for power, and a sense of importance (grandiosity). 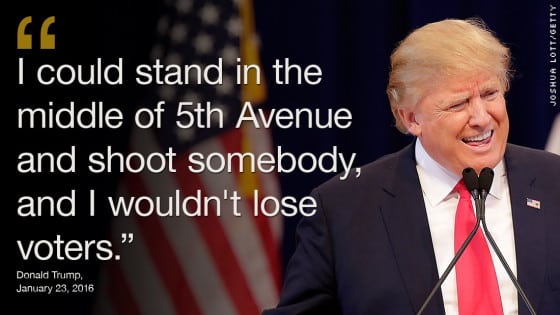 Psychologists say that his condition is a combination of mental disorders that cause one to distort reality and make impulsive decisions. These disorders form, according to the doctor who coined the term Malignant Narcissism in the 1960s, “the most severe pathology and the root of the most vicious destructiveness.”

This is the first time in history that so many mental health professionals have collectively diagnosed a living individual. And their conclusion, based on the hundreds of hours of Trump’s on-camera dialogue and off-the-cuff public speaking, is alarming because it says that our current president is too mentally disturbed to fulfill his office.

From a news story I’ve lost the link to:

To be clear: Being a standard deviation or two away from the norm when it comes to one’s psychology does not automatically make a person dangerous, bad, or unable to do a job. Millions of people have depression, anxiety, or mild mania and still function well. Abraham Lincoln went through depression, after all.

Unfortunately, unlike many other mental disorders, Malignant Narcissism makes its sufferers actively dangerous to other people. It’s more akin to delusional schizophrenia than it is to anxiousness.

In addition to the mental health community, senators and congresspeople from both parties have expressed concern about Trump’s mental health.

Whether they are right or not has enormous implications.

But, really, if you missed it: