I’m not just talking about politics… although, DEFINITELY with politics.

The right is so insecure about upholding their “beliefs” that they’ve bypassed being reactionary and are now PREactionary – they jump to conclusions and go absolutely insane as soon as anyone says anything with any keyword they don’t like. Methinks a bit of cognitive dissonance at times…

And the left… well, the left has been in an emotional crouch, waiting to be hurt by whatever the right has to offer for, like, years. And, in light of the UC Berkeley riot, now looks no better than the knuckle-dragging idiots they deem the right of being…

The race for President didn’t help either. During their campaigns, the candidates embodied the defensiveness that voters feel and so-effulgently express. “Because of what THEYYY did, I’m gonna do this…” “Donald grabs women by the pussy…” “Well, Killary had a private email server…”

‘Round and ’round people went with that blame game… going nowhere, doing nothing for their position, hunkering down & feeling more and more justified by their badness.

Even the saying “Kill them with kindness” is passive-aggressive b.s.

Be kind because you’re kind. And if it kills the person’s ill will towards you, then… great.

The same sort of blame-y grossness surfaces in peoples’ own pursuits. I see things like: 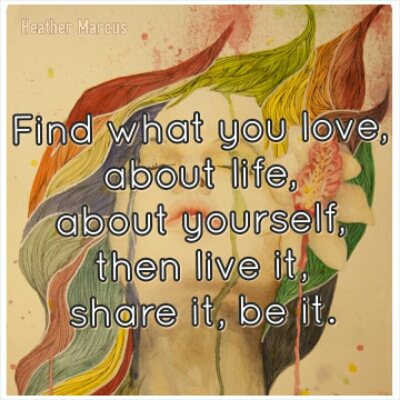 If your drive is based on someone else, you won’t get very far. That tank runs out fast.

Yes, someone may hurt your feelings (remember the story about why Zuckerberg created fb?), and that may motivate you to action. But those feelings won’t lost forever. Then what motivation will you have?

No matter what you’re dealing with, if you’re not going to be true to yourself, your beliefs, your vision for how you want life to be, you won’t get anywhere… It’s a combination of focus, clarity, self-possession, true motivation, and having the balls to be your own person.
What does someone else have to do with you?

How do someone else’s thoughts and/or actions affect your ability to form your own thoughts and take your own action?

This speaks directly to my All In philosophy. Learn more about it here.