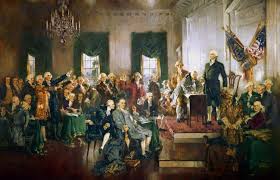 It can mean anything—just like the people who make up America, the dream’s ambiguity offers a variety of opportunities. The writer James Truslow Adams said in 1931 that:

[L]ife should be better and richer and fuller for everyone, with opportunity for each according to ability or achievement regardless of social class or circumstances of birth.

The new continent provided a blank canvas for people to come in and paint an abundant life. From the intersection of good fortune, plentiful resources, massive amounts of land, and creative ingenuity the American Dream was born and grew. Read a really great explanation of the progression here.

The American Dream is simple: it’s the unwavering belief that anyone— you, me, your friends, your neighbors— can become exceptionally prosperous, and all it takes is the right amount of work, ingenuity, and determination. Nothing else matters. No external force. All you need is a heaping helping of grit and grind & you too can own a McMansion… you lazy P.O.S.

You see what the narrative does to us?

In a country with constantly-expanding scope and opportunity, what many people think of as the American Dream was totally attainable, feasible, applicable.

That’s not the world we live in today.

LIVING IN THE TURNING POINT

Analysts, researchers, economists, observers, historians all identify different moments in I.S. history as the turning point when our country set course for its current state. Some people say it was 9/11 that changed the way many Americans think and act, others say it was the demise of slavery, and others say that it’s the natural progression of our economy. By almost every major statistical measurement, the average American is worse off than a generation ago.

Some talking heads blame the younger generations, labeling them as entitled, self-centered, too absorbed in Likes to work… and, sure, some of those complaints may have a grain of truth to them, but data suggests that kids these days are not the problem.

Generally speaking, Americans today are the most-educated and productive generation in US history… but also insanely unemployed and under-employed.

The simple fact that there are no employment opportunities of the type that formerly provided the financial incentive, upward mobility, and structure within which people could succeed, AKA: middle-class jobs are gone.

Despite Obama’s impressive proclamation that he’s halved the unemployment rate since he took office, most of the drop in unemployment since the 2008 crisis has come from part-time or low-skilled jobs, and from people leaving the workforce altogether.

But why? What happened? Where did we go wrong? Is this even wrong? Who can we blame to sound informed at the bar?

Well, there’s actually no one to blame.

Things changed. We grew. Technology evolved. Innovation happened. The old strategies and beliefs that the country were founded on have met their limitations.

Our resources are different now. For example, the Manifest Destiny mentality no longer applies. We ran out of land around 1900. The U.S. conquered Cuba, the Philippines, and Guam… but, after the World Wars, we realized something the English never did: power can come in ways other than physically invading other countries.

We can just lend them money & tell them to sell your stuff on the cheap.

That is, essentially, what we did throughout the Cold War Era. We called it a global hegemony (the political, economic, or military predominance or control of one state over others), and it was basically a low-level form of extortion of the third world: either open up trade for us, let our corporations come in and use your land and cheap labor, or get shut out and continue to wallow in poverty.

Unsurprisingly, this tactic worked—dozens of markets around the globe opened up to us, and in return, we promised that our military would protect them from communism (ghost noises).

That approach also petered out—most of the poor economies developed enough that they aren’t so cheap and easy to exploit anymore. Cheap labor was up next, which came in the form of outsourcing.Why employ a bunch of local workers when you can build an entire factory in China and get the stuff made for ¼ of the cost?

And, not only are jobs going away. The types of companies and innovation require far fewer workers. With the rise of information technology, automation, and artificial intelligence, the fact is that we don’t need as many people.

This may be the biggest and scariest one of all.

Products and services from the grocery store checkout to taxi cabs have been automated, putting tens of millions of humans out of work.And without money, those people cannot be customers. And without customers, businesses cannot survive. and when businesses don’t survive, people get put out.

The spring has dried up, but…

Change inevitable. Now, we’re experiencing it in a very palpable way. We see it when people strip away their labels and affiliations—political and otherwise— to look at the issue objectively. People are saying, “There is something big happening here,” and seeking solutions.

A new economy is blossoming. People, businesses, governments, and communities will play different roles, and an entirely new set of rules will apply.

The good news is that this makes us more open to ideas and innovation: a rethinking is possible.

This allows us to develop a new way forward, to institutionalize a new direction and a new system that we build together. But it doesn’t mean that change isn’t difficult. Fortunately, we Americans are an innovative bunch.

“In moments of crisis, America has gathered up its best forms and extended them into the future.”

The American ream as we know it may be dead, but the promise for freedom and growth remains.