With clear vision and decisive action, achievement becomes a breeze. This concept applies to inclusion, as well; when inclusiveness is the desired outcome, a good leader will pursue it and inspire the same in others.

What Makes A Good Leader? 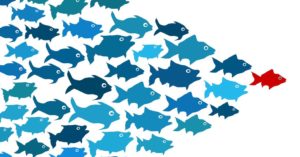 Leadership is the art or process of influencing people.

There have been notable leaders throughout history; some of whom have nothing in common OTHER THAN their amazing abilities to influence people. Hitler, Gandhi, FDR—they were all active during [roughly] the same period in time and had massive influence, albeit in pursuit of very different ends. The same goes for JFK, Nelson Mandela, and Napoleon.

While those leaders had very few commonalities, the characteristics they shared are significant. There is so much to gain in the search for what they, who appear to be so different, have in common. And the big lessons we can take from their commonality—being immensely effective—can help achieve other goals.

If you were to ask someone with an MBA, they might explain leadership in management terms. From Reference.com:

The purpose of management is to plan, direct, organize and ensure the success of a business at various levels through a number of methods including customer satisfaction and employee training. Management, normally made of a manager and their assistants, is key to running an organization on what could be considered microscopic levels.

A student of religion might point to what religious figures share. Moses’s life provided moral and ethical underpinnings that would constitute the next thousand years of Jewish thought. Zarathustra understood the cosmic war—that man had been given the power to choose between good and evil—and chose to seek the light. Siddhartha Gautama, also known as the Buddha, achieved the ultimate peace.

We know that the religious stories are all different (people fight about it a lot), but one trend persists across the figures:

Between those two ends, spanning the formal and the spiritual, lie other great leaders. Their similarities are their great accomplishments, which hold the key to emulating their leadership.

It appears that successful leadership boils down to two key steps:

That might be the most simple way to put it!

First, choose what you want to happen.

Then, live in such a way that it will happen.

So… how does this apply to inclusion?

When a good leader decides to be more inclusive, she or he will act to pursue its realization—diversity appreciation, collaborative thinking, and inclusion will ensue.

Through their actions, good leaders will set an example of what it means to be inclusive. They will influence others to act similarly. By bringing people into the fold, including others, they will increase the reach of their inclusive actions. They will live as a testament to their goal.

It all begins with a choice.