A few weeks ago, Jelaine caught Izzy and me being all snuggly: 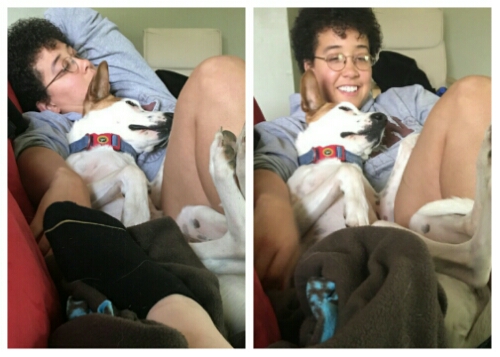 This week, we got a new dog, a totally rad Blue Heeler rescue who we’ve decided to call Maggie. And she is fitting in SO WELL thus far!
Maggie is a frisbee-chasing-and-sometimes-catching lovebug who doesn’t hesitate to show affection or get close. She showed me her sweet and gentle side almost immediately, curling up and leaning against me as I read: 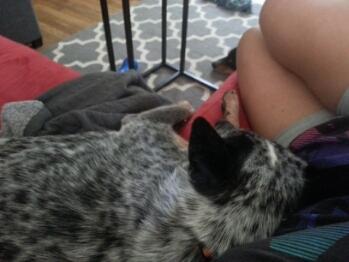 It softened my heart to know Maggie felt so comfy (and she just crawled under my arm as I write this from the couch), but it made it clear to me that she isn’t the type of dog who was treated badly; Maggie just didn’t have a family structure, leadership, or anyone to reciprocate love. She doesn’t flinch or cower; she can eat right next to Pax and Izzy without issue; and she accepts praise and correction well.
In light of the recent fatal dog attack in South Dallas, I’ve been hyper’aware of what these dogs are capable of… I mean, in 2011, Pax was chewing a Kong against my foot and accidentally caught my big toe, and I STILL haven’t forgotten *that* blinding pain.
But I use them as pillows. I can grab their food bowls without hesitation (sometimes, to their chagrin, to drop in heartworm meds). I go to sleep feeling safer with them in the room, nevermind the savage beasts from which they descend.
Any of my dogs could mess up my whole situation. They don’t.
Instead, they look at me with stars in their eyes. They follow me around the house. They lie with their heads in my lap, at my feet, under my elbows, trusting that I won’t hurt them either.
That level of trust and affection is great to me – we don’t even speak the same language, but we have mutual understanding and love.
It kind of makes me wonder why all of us humans who CAN communicate much easier, who are the same species, and who have so many more commonalities can’t learn to peacefully (even lovingly) coexist.
Maybe the commonality of gentleness trumps species and language. It’s special when someone makes the choice to be upright, sensitive to others, or basically good. Isn’t that where we’re headed as a society, that the effects of one’s actions are the measure? Isn’t that at the core of the backlash against religions whose followers are deemed hateful, dogmatic, bigots? People are paying attention to results.
I know, personally, the results when gentleness is lacking. I know the soul-crushing pain of being repeatedly hurt, wounded, let down, abused, shamed, scared, abandoned, or even simply ignored by people who didn’t possess  compassion for their own selves, much less for anyone else.
So I became hardened and harsh, unwilling to trust anyone else’s intentions and lashing out at any sign of threat.
The problem was: I considered everything a threat. Somebody new? Threat. Something unexpected? Threat. Someone else’s bad mood? My problem, too; I’m probably the reason for it, so I better get defensive.
Luckily, I also got to see and know what incredible gentleness is. The people who showed me it were the perfect antidote to the negative forces in my life, and are the only reasons I didn’t succumb to that incredible darkness–that, right there, proved to me the power of gentleness. It can save a life.
Gentleness is the quality of being kind and careful. You don’t have to pick It up from the store; we each already possess it. It takes a moment of empathy, a recognition of our connections, a smidge of congeniality to use it.
Maggie agrees: 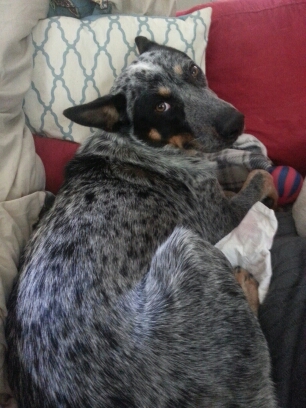