My Texas Government class recently covered political socialization, political ideology, and the multiple factors that play into policymaking. Very timely stuff in light of Mississippi’s anti-LGBT law that was just passed under the misleading and passive-aggressive guise of “religious freedom”… I’ll get to why that’s a carefully-worded pile of bull shortly.

Visit ABC News for their report.

At the beginning of my government classes, I talk about The Cycle of Politics and Life, something I came up with to help my students understand how we shape laws which come back around to act on us. So, essentially, we shape our own destiny. Here’s what my board usually looks like after that lecture: 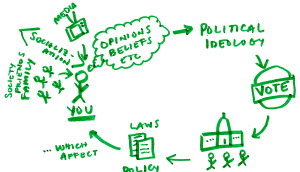 I use that diagram to highlight how conscientious we should be when allowing the government to act upon us; but, even more, we should be aware of what we do to ourselves when promoting certain types of policy.

In all these years of studying government and politics, I’ve noticed how strongly people cling to their view of how life should be, which is based on everything they learned about life. These things are shaped by: who we’re around (during childhood AND as adults); what we watch (because we don’t seek out programming that we disagree with, therefore, our views are only reinforced, not challenged or improved, by the media we choose); and what we learn or choose not to learn. This ensures that nobody’s view of life is exactly the same, but many are similar enough that they can be represented by the political parties.

[In fact, it’s the political parties’ goal to figure out how large of an audience they CAN capture, in order to win elections. Ask yourself why the GOP currently running such drastically-different candidates.]

But, what so many people fail to see in this melee of high-tension issues,, like abortion and marriage equality, is that they are voting away their own lives. By that I mean: when you support certain policy, you are bringing its effects back on yourself.

That’s the karma of politics.

It’s easy to see how this plays out with the basic, low-level types who say things like, “God hates fags.” and, “This isn’t my America,” and, “Keep our schools segregated.” (Yep, I lump them all into the same category.)

Sorry to burst your small-minded bubbles, but this is a country of the people, by the people, and for the people… ALL THE PEOPLE. Yes, the majorities win elections; but that doesn’t allow the tyranny of the majority to discriminate and disenfranchise and otherwise make life intolerable for those who don’t fit into the group. And that’s exactly what many Christians are feeling: the Constitution protecting everyone else’s rights.

But that negative feeling is, I’m sorry to say, what people get. They brought it on themselves. Dang, that’s messed up. They’re just trying to hold tightly to their beliefs. That’s not messed up; that’s KARMA. These groups base their happiness on whether or not their fellow citizens – FELLOW HUMANS – are subjugated, disenfranchised, frustrated, controlled, discontented, forced to live under a regime that doesn’t consider them deserving of equal treatment.

And what do those in the “majority” feel when the Supreme Court comes back and says, “No, rights belong to everyone.”? They feel subjugated, disenfranchised, frustrated, controlled, discontented, and start talking about how tyrannical   the government is.

But, aren’t they creating a tyrant government when they ask for social control?

And this brings me to what so many people miss when it comes to government and policy:

WHEN YOU TAKE AWAY OTHERS’ RIGHTS, YOU PUT YOUR OWN AT RISK.

And this is where I’m going to require thinking on a scale larger than “I don’t want queers to get married”: if you give the government the power to decide who can and cannot get married, and/or prescribe a belief system to the right to marry, you have to ask yourself what happens when the elements of what makes a good or bad marriage no longer encompasses yours. What happens when, “You have to abide my rules,” comes back around to you? What if Islam becomes the leading dogma – still willing to say that government should be run according to the dominant religion?

And the same idea applies to Democratic principles, too.

Golks who feel the Bern want to, essentially, punish those in the higher tax brackets for their wealth. Well, what happens when you allow the government to take and take and take from those who have more than others… and, slowly, you creep up into the category of the “HAVES”, not because you have more, but because everyone else is a Have Not… and it’s your turn to be stripped of what you have?

We have to ask ourselves what we are willing to allow the government to do.

We have to ask ourselves how much discrimination we want to allow.

We have to ask ourselves if, in this relationship between each other that we call society, we want to be right or be happy.

We have to ask ourselves how far we will allow our society to devolve into factionalism and mindless, uneducated suppression.

The extension of rights to one group doesn’t mean any fewer for others. (That’s a very Grand Wizard way of thinking. You can do better.) And that’s why it’s ridiculous to say that religious rights are being trampled by giving everyone the right to vote, work, marry, etc. Religious freedom has nothing to do with other people having rights; the fact that Adam and Steve can get married doesn’t impede anyone’s ability to practice whichever religion they choose. Laws with titles that lead Average Joe to believe that his beliefs are being protected are bogus, misleading, and designed to incite the same type of arguments that drive politics.

We are all citizens of the United States, which is run by the government. A government is a collection of institutions that control and certain geographical area and its people. No matter our beliefs, we are, each, one of the people. Just because your political party wins doesn’t make the laws apply to you any more or less. And I hope more people begin to understand this fact, that we are not all separate, that the ill will or kindness we extend to one another shapes our world and comes back to us.

I’m reminded of something my Papaw said when explaining rights and liberties to a pre-teen me:

“My right to swing my fist ends at the tip of your nose.”