with a little bit of

Here are some headlines from the most recent racially-charged incident in South Carolina:

But the stories provide a little insight to the true story. The student was asked by the teacher to leave, and ignore the teacher. So, the principle is called in, and the girl ignored his request for her to leave the classroom. And that was when the police officer for the campus was called in. And, yet again, the student refused to get up and leave when asked.

Am I the only one who thinks SHE had the problem here??

As a country, we are so wrapped up in the inflammatory and becoming incensed at every turn that we seem to miss the bigger picture. Add to this mix the lack of personal responsibility & we find ourselves at the brink of a character epidemic. It’s shameful (and, yrs, I know stating such puts me in close proximity to Grandpa-ville).

But I really do feel it’s sad that we, in general, are prompted to look beyond the instigating behavior and use it to inflame emotions and irrational reactions. In no way do I think that the student deserved physical retaliation and punishment, but her defiance and complete lack of respect for authority did require some sort of intervention. And, because we tell our kids that they are special and untouchable, we get these sorts of stories that pop up. Because of this perverse perspective, this girl thought that she didn’t have to obey authority… for whatever reason, she thought she was above reproach.

There are so many factors that could play into it, but the news keeps bringing up race. People talking and debating about the story keep bringing up race. But, I’m not shy to say that RACE IS NOT THE ISSUE HERE. Entitlement, disrespect, and disregard for truth are the problems.

That the police officer involved is white and the student is black should not be the focus of this incident. The bad behavior, the failure of character, the lack of integrity is the true problem at the core… But I guess that’s not something that you can tell people anymore.

The racial history of this country is what it is, but we’ve reached a point where we have to start looking at character and behavior. Race is not an excuse to act like a turd. That’s it, that’s all. 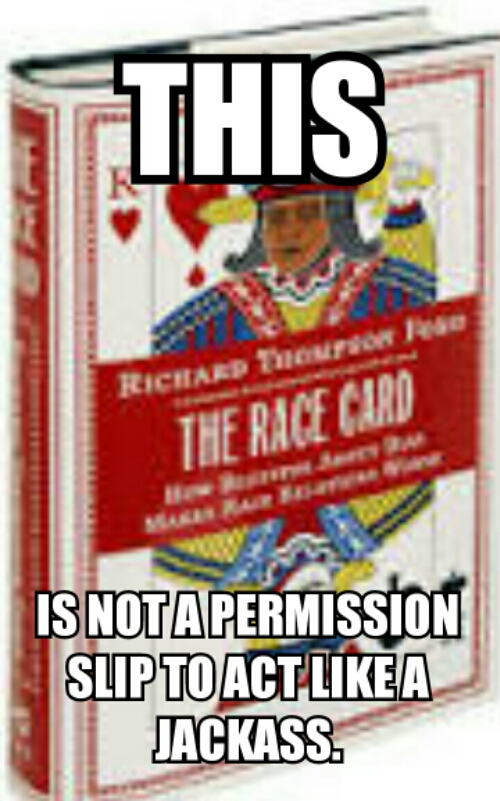 How we act gives others AQ about how we want to be treated. That might be a little too self-determining and too much responsibility for some folks to handle, but that’s how it works.

In a perfect world, we would all transcend the situation and wouldn’t react negatively to negativity… That student would have gotten up from her desk, and gone to talk to the principal, and told him the situation  and let it be resolved through the proper channels. The police officer wouldn’t have had to  drag her away from her desk when she resisted.