Jelaine & I just reached the two-year mark… that’s almost unreal to me!

Before her, I didn’t make room for people in my life. I didn’t feel like my goals left room for anyone else. And then we met.

It was just the right time. I had the time and space for her because there was literally no other choice – she belonged in my life and, even more, she fit in all the right ways. I had found my *person* (darnit, Shonda Rhimes, you nailed it with that…).

The first night we talked, Jelaine told me about a camping trip she had just been on at Zion National Park. We spent a considerable amount of time talking about being outdoors, as well as previous camping trips, and we connected with each other over that feeling of being connected to nature. I can remember the distinct feeling that, because of Jelaine, I would never be the same. It felt like I, at that point in life, was about to start an adventure & had stumbled across the perfect companion for my journey.

Life has thrown some pretty big obstacles in our path. Getting past them has given us individual journeys to complete; and then there is the growth we’ve had as members of this team & as this team.

We’ve also had some great trips in the physical world. Luckily, we enjoy road trippin’ & do well in the car!

There was the Coyote Attack in the Wichita Mountains.

We’ve made tracks all over the state of Michigan, dog-shaped part AND mitten.

So, it seemed fitting when, on the weekend before, Jelaine suggested that we head south to Galveston and camp on the beach. We pulled the tent out of the garage, along with the camping chairs, and piled everything- sleeping bags, tent, cooler, etc.-in the front room. I was really excited to get away, even though our work schedules only allowed just over a day away.

We checked the forecast for Galveston often as the week wound down, and we were pleased to see nice weather predicted and blue skies as far as the eye could see down I-45. It wasn’t even discouraging when the state park was full; the park ranger told us that people typically camp just south of the park, and that we could simply drive out onto the beach and lay down stakes.

So, we had dinner at a bayside seafood joint, then headed out to find a patch of sand. The ranger wasn’t joking… we literally pulled right off the lone gulf-side road and set up our tent as the sun went down.

We set up our chairs barely out of the reach of the waves, poured some wine, and chatted… but the mosquitos were too aggressive. As I write this, the prehistoric malaria-West Nile-hybrid virus they inherited from their pterodactyl ancestors flows through my veins… To escape the mosquitos with their coffee stirrer-sized labrum, we crawled into the tent.

It wasn’t long until the ocean sounds lulled me to sleep.

And it wasn’t long after I had fallen asleep that strong gusts of wind stirred me into semi-consciousness.

And it seemed even faster that the tent buffeting against the wind was followed by lightning and thunder.

Jelaine was already sitting up and peering out of the tent flap when I woke up. It was 3:30 a.m. I turned on my weather forecast app and saw no rain in the forecast… Hard to believe, while being completely believable – news weather people are the only job I can think of where you’re allowed to be so wrong, so often, and still keep your job.

We talked a little bit, but mostly spent time listening to and being amazed by the weather events.

That’s when it started to rain.

It was the typical ocean rain, the type of rain that I wasn’t too worried about and had experienced on other beach trips. But the wind wasn’t giving up. And the rain only came down harder. And it started to get really intense (I took some video of it).

That’s when the tent fly flew loose from the stakes! In the tent, we were pummeled by (what felt like) gallons of water every second!

Jelaine got up to fasten the lines again, but as soon as she stepped out onto the beach, she started to sink into the watery sand.

She grabbed the fly and hitched it back to the stakes. In those few moments, she got soaked by the downpour. The rain was coming down so hard, we couldn’t hear each other speak. The entire weather situation was stifling… overpowering… overwhelming. And, as Jelaine crawled back into the tent, shaking sand and water from every part of her exterior, the fly came loose from a corner on my side and we were, AGAIN, assaulted as the monsoon made its way inside.

It didn’t take much debate, or more than a few words, for us to head to the car.

We gathered what we could, leaving what could stand to get wet, and took a pause before unzipping our respective side’s flaps and stepping into the fray. It was surreal. There was no need for a flashlight, as if its puny beams stood a chance against the walls of water that cascaded from the sky. At one point, lightning illuminated the entire world around us, and time stood still… I paused for less than a split second and took in the entire scene, completely humbled by my smallness and nature’s grandeur, before hauling myself and my bag into the car.

Shut up packs The silence in the car was startling. The thunderous downpour from before was muted, and the silence was deafening. The only real sound was our quickened breathing.

My eyes were wide, I could tell. And Jelaine looked like she needed to take a personal second as well!

We sat for a few silent seconds, then started to chuckle nervously. The chuckles erupted into laughter when Jelaine looked over and said, with as much sincerity as she could muster, “Happy anniversary.”

That’s when I took out my phone to check the weather app. It still showed no rain. 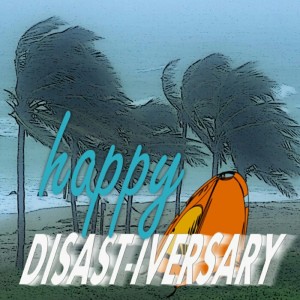