Back in December, I visited the hospital three times in one week (actually, it went: hospital, hospital, Arizona on my birthday, Christmas, come home, hospital > Life = different). On the third visit, the eye specialist said something seemingly-obvious, trite, and (at the time) kind of obnoxious, but that has stuck with me and increased in impact every day since. She said:

Plain and simple. “You should feel good.”

She said this after the usual line of questioning – “How long have your eyes been blurry? Do you feel tired? Have you noticed any lack of strength in your body?” – and after I said that I felt rundown nearly all the time, but figured it was just because, well, Life. The doctor looked absolutely appalled by my reasoning and, in retrospect, it is a pretty idiotic reason to endure feeling like crud.

But we do it all the time! So many folks walk around, day after day, enduring all the bad. People endure poor health, underperforming bodies, and general malaise. Bad relationships, bad jobs, unfulfilling lives – the list of things that are simply endured can go on.

But I will make this clear:

Enduring is no way to live.

Let me repeat that:

ENDURING IS NO WAY TO LIVE.

To endure is to suffer (something painful or difficult) patiently. [That’s the exact Google “define: endure” result.]

“You should feel good.”

I was enduring life with terrible vision because I finally had a foot in the door to the career of my dreams, causing me to be unsafe and scared and stressed… what in the world? I was operating from the position that I should suck it up, not be a wimp, that eschewing my own needs was somehow noble… a delusion. A delusion that’s wide-sweeping; the kind of thinking that causes people to stay where they are, no matter how much destruction they’re facing. There’s an epidemic of delusion.

This delusion comes from everything around us, rather society. The media, advertisements, the economic system, bastardized values that convince people they’re pious and moral, and dogmatism all play a role in distracting people from knowing and participating in what’s real.

For example, I have a friend who sits in a cubicle all day and stares at numbers on a screen for some company. He admits to being unhappy and unfulfilled, but he makes enough money to pay rent and go out to eat and go camping a few weekends out of the year, so he endures. This same friend is not only overweight, but he’s unhealthy… and he knows it. And he doesn’t do anything about it! He goes out to eat wings and drink beers regularly, is just as inactive during his free time as he is at work, snacks on vending machine crap, and gives his overall health zero consideration. He admits he feels sluggish and bad, but he’s not sick-sick (yet), so he endures. Instead of doing well, being well, he just avoids doing badly.

Avoiding the bad, but not pushing into the positive — it’s a trend, if you ask me. 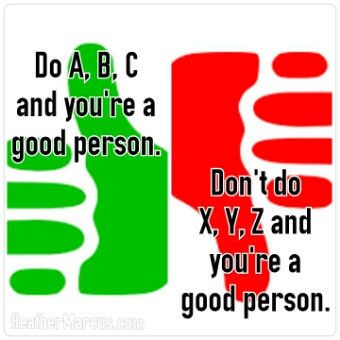 The same -/+ can be seen in the way people behave and express their beliefs. So many people just avoid doing bad because they’re afraid of Hell or whatever afterlife punishment, instead of actively living as examples of the goodness they supposedly believe in.

I actually wrote something similar nearly a year ago – read ‘In the Name of…’ at this link.

Enduring. Breaking even. Avoiding bad. It may not seem outright negative, but it’s no way to live.

Not pursuing good. Not being proactive about doing well. That’s just lazy. That’s ignorant. That shows lack of dedication, lack of understanding, lack of reality.

We are meant for prosperity. We’re meant to do good and be good and have good. But we have to pursue it and get on the same path as goodness. No matter how much someone hopes for health, no matter how patient they are or how much suffering is endured, he or she will not be healthy until they take measures to be healthy. It’s as simple as that. To act or think differently is downright stupid and delusional.