I randomly split my students into four even-numbered groups, sent each group to a designated wall in the room, and told them to nominate team captains.

The captains chosen were the most charismatic available to each group – the handsome, the smiley, the confident, the ones who typically speak up during lectures. One group didn’t even elect a captain; all the members basically looked at one student, and they all jumped right into talking about other things. None of them even knew what this experiment was, but the leaders were leaders no matter what!

Once captains were chosen, I told the other team members to face their respective walls, never to turn around, and then blindfolded the captains.

I placed a Rubik’s Cube on an eye-level stand in the middle of the classroom and situated the captains close enough to the cube so that they would only be able to see the color facing their side.

“What shape do you see?”

“What color do you see?”

Each took a turn to answer – red, blue, green, yellow. A student facing the wall, recognizing his captain’s voice, gave a shout-out: “Blue Team!” which caused a ripple around the room. Lines were drawn.

Yellow Captain wouldn’t be outdone; her eyebrows furrowed and she called out to the teammates at her back — “But we know it’s all about the yellow!” — and got a few hoots in response.

Nick, wearing jeans and a cerulean button-up, called from his place on the Red Team wall, “Red!” If I were a gambling man, I wouldn’t put my money on red any other day of the week.

Naturally, everyone called out their team’s color! What about magenta? Purple? Teal? Nectarine? Turquoise?? I was amazed at how much this forced context limited their ability to think.

“Do you guys remember what primary colors are?”

A particularly artsy student explained that primary colors are those that can be mixed to make other colors, prompting someone to call out Green for being the only non-primary team and therefore inferior to the rest of them, which gave another student the brilliant idea to yell, “Let’s kill the green team!”

“Calm down, Hitler, we’re not killing anyone. But! Whichever team has the most people when we’re done, everyone on that team will get an A.”

One of the more spastic students started to leave the wall…

“Without leaving your place! Without using force. Stay where you are, and figure out how to win hearts and minds.”

They were silent. Stumped.

Blue Captain finally spoke up: “Well, I’m looking at this blue, and it’s really quite beautiful… plus, our hometown teams are blue – the Cowboys and the Mavs…” He petered out, realizing how uninspiring his appeal was.

Red Captain talked about red representing power, which Green countered with the fact that they stood for money. Yellow pointed out that they didn’t HAVE any money.

The students along the walls started making personal appeals to friends on other teams — “Jacqueline, come to my team!” But Jacqueline’s teammates, scared to lose numbers, were quick to shoot it down — “If y’all are friends, it won’t matter and you’ll come over here!” They were yelling at this point, all frantic and excited… and completely unsure why.

“Okay, I’m changing the game. If anybody along the wall can guess what the captains are looking at, you’ll get the only A in the class.”

Suddenly, self-interest was paramount. Each student started shouting questions at the captains who were severely handicapped by limited information and reticent to help someone else get a grade.

Finally, I ended the game — “Everybody, turn around. Captains, step back.”

One student blurted out, “Aww! It’s a frickin Rubik’s Cube! Why didn’t I guess that?”

The door was open.

“Why didn’t you guess that?”

They all, after knowing the answer, had all sorts of answers: not enough information by not being able to see or know what the captains were doing; weren’t thinking about it; didn’t ask the right questions… They all acknowledged that they got caught up in the melee, forgot to think, got wrapped up in wanting to be “on top” (a term they agreed to use instead of “right” since nobody could actually prove which team was right). The captains said that they didn’t explain themselves well enough; one pointing out that none of them said that they were all standing next to each other, which could have helped everyone else understand that they were around a cube. Then, a personal favorite realization: “This is like Life, man. We’re all looking at the same thing, just from different views.”

A quiet student smacked his forehead. “I knew we should have all agreed to just go to one team, then we would have all gotten A’s!!” I put my pointer finger on the tip of my nose…

Suddenly enlightened, they broke into riotous jabbering, calling out each other and their own selves for factionalism and belligerence. This was like Life, man… 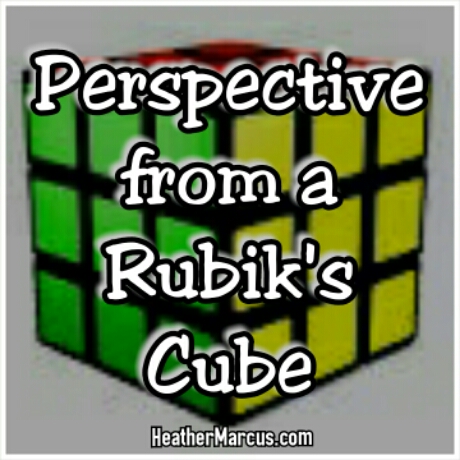