In my quest to maximize life, I’m looking at everything from the things I do to the things Jelaine and I buy and even to the shredded food that comes from our daily juicing.

Today, I was curious about making dog treats from the shreds so Pax and Izzy can have tasty & healthy treats!

I consulted a few recipes online, like The Cozy Kitchen’s homemade dog treats and my Spirit WASP Martha Stewart’s site. But, since I’m doing this with a unique set of ingredients, nothing struck me dead-on. Flying by the seat of my pants… 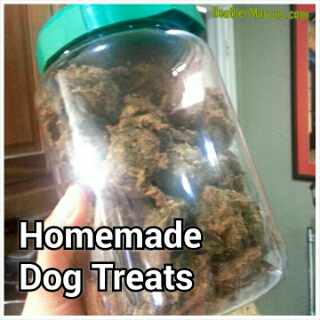 Today’s juice is a mix of oranges, lemons, carrots, apples, pears, a sliver of cabbage, and cucumber.

I’m putting it in a pot with a bit of water, so I can dissolve beef bouillon cubes and maybe some peanut butter.

Nope, were almost out of peanut butter!

Okay, 4 bouillon cubes and one-third cup of brown sugar, in the pot, just to give it some extra taste.

Let it boil down…

(It’s been a Swiffer’ed living room, a load of laundry over the course of half-a-‘Scandal’ rerun… still cooking down…) 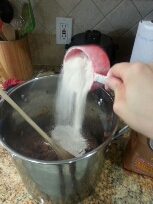 I took the pot off the heat, let it cool, then added a cup of wheat floor (mainly to test the fluidity of the mixture & determine what else to add).

Then, I added two cups of all-purpose flour. Gave it a good mixin’ and let it sit while I folded a load of laundry.

I got the oven headed toward 350 and scooped tablespoon-ish dollops of the “dough” out: 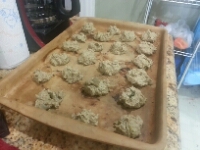 These baked for 30 min & look really good – puffy, but solid, and they are really fragrant (even to my human nose). There’s still a LOT of dough left, so I’ll be doing another round or two… 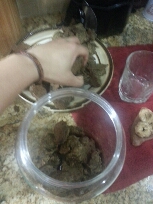 i let them cool on a plate, and then into the treat container for safe keeping!

The dogs were keenly interested by this point, and they’ve been hovering near the kitchen, eyeballing the treats… so I busted out a few biscuits and they chowed down! 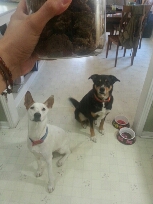