I asked my fb friends for foodspiration because there are gorgeous zucchini in my refrigerator just begging to be grubbed! I wanted something new, and an old law school friend came through with a suggestion her family digs:

I used this potato latkes  recipe from the Brown Eyed Baker as a sort-of guideline for mine (essentially, what dry ingredients, like baking soda, & a general method).

It was fun to whip up something different, and the result was super tasty!

Here’s what I did:

Grabbed the unused spaghetti’ed zucchini from last night
Chopped some onion and added it
Threw in some of my Bountiful Loaf creation, as a filler/binder
Hit it with seasonings – salt & pepper, onion powder, garlic powder, paprika
Tossed in some baking soda to help it lift
Put in an egg, broke the yolk
Worked everything together

I grabbed the food processor & a handful of seasoned breadcrumbs we happened to have in the pantry. Added about half to the zucchini mix & saved the rest to coat the outsides.

While a spoonful of coconut oil heated up in the pan, the mix chilled out in its bowl

Then I formed little cakes, rolled them in the breadcrumbs, dropped them into the pan, & kept an eye on them. 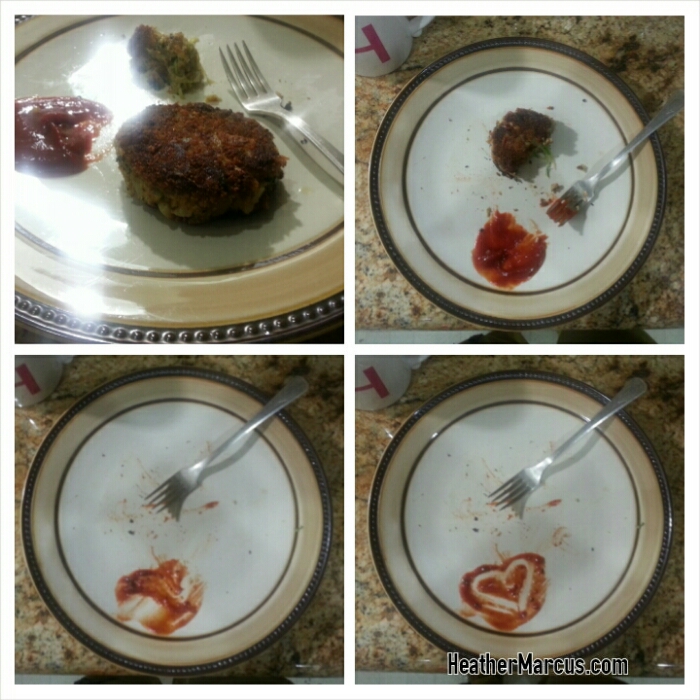 It was so good, like took-one-bite-and-finished-standing-at-the-counter good. Who needs chairs when there’s good food?

And, since I like to dip, I put some ketchup & Sriracha together… it was really nice with it.

Definitely adding this to the lineup!