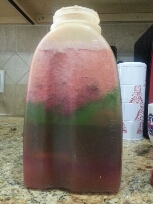 Having gotten some HUGE cucumbers from the Farmers Market, I was jazzed to throw one in the juicer and see what sort of goodness would come out.

It produced SO MUCH juice that I worried the cucumber would overpower the entire jug. But I was so wrong.

I’m talking about YUM. It was crisp and tasty and refreshing.