December 22nd and 23rd, I got to spend time at the best place for the holidays:

Okay, I’m being sarcastic – the hospital is the worst! It was definitely disheartening to be there on the days before my birthday and before Christmas. I can also imagine how stressful it was for Jelaine to be there with me, especially considering she was about to drive us to Arizona.

Why was she driving?

Well, it seems as if my eyes have gone on vacation. My vision has gotten worse & worse over the past few months, but I kept chalking it up to staring at screens and being stressed out.

But, the morning of December 22nd told me otherwise. My eyesight was the worst it’s ever been, everything was cloudy, and something was very wrong.

An emergency room visit on the 22nd led to a Vision Clinic appointment on the 23rd. And the Vision Clinic sent me to have all of my blood drained… Ok, it was to have 12 vials of blood drawn. They were testing for everything because the condition of my eyes was so worrisome.

Turns out, my cloudy vision was due to inflammation in the uvea layer of my eye, a condition called uveitis. This inflammation can be a symptom of a larger autoimmune issue, and that’s what the doctors were worried about.

I left the hospital on the 23rd a complete basket case. I had to wait until the 29th to get an answer. (And I’m pretty bad at waiting.)

It was a heavy-hearted Christmas, for me, because on top of not being able to go to the store and buy gifts, I also had to spend a considerable amount of money that would have gone to gifts to buy the prescribed eye drops.

However, everyone in my life was very understanding and kind about the few gifts I did have to give. It really put the holiday into perspective. I felt like hiding in shame, sad to not have as much to offer, but everyone – especially Jelaine – was quick to tell me that they were just glad I was getting better.

It seemed pretty crazy to me. To be a patient, to be on a medication schedule, to be looked at with pity, for everyone to be worried about me and asking how I was much more than if something didn’t seem wrong with me. I’m not sick! There’s just something weird going on with my body!I

December 21st marked the last day of a 12-week challenge that had begun as physical, but ended as a whole body change. Because of this, I’m in the best shape I’ve been in a few years. But, there is no amount of work out that can fix jankety eyes or actual, medical problems!

The 29th rolled around, and there I was in the Vision Clinic again.

The doctor came in and he looked alright, not like he was about to give me bad news. I inhaled in preparation of a sigh of relief…

…but I didn’t exactly get to exhale.

Out of all the blood tests they ran, everything serious – sarcoidosis, rheumatoid arthritis, Lyme disease – came back negative. The only thing I tested positive for was antinuclear antibodies. 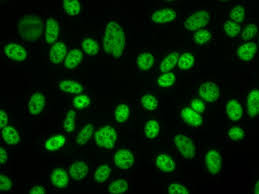 Antinuclear antibodies (ANA) are (in the most simplified way I’ve read so far) a group of antibodies produced by a person’s immune system when it fails to adequately distinguish between “self” and “nonself.” They can indicate other illnesses, or they can simply mean that they exist and are doing crazy stuff in my body.

I am, literally, fighting against myself.

This diagnosis is the most non-answer answer I’ve ever gotten in my life. And I’m kind of pissed off. This is not exactly something to treat. It just is what it is.

I could throw something.

Maybe I should throw something. Relieve some stress. Because that’s just about the only thing that the doctor thinks really set off the chain of events, as far as inflammation and antibodies are concerned, that ended with me in the examination chair.

Here I am, coming off of 84 days of re-creating myself mentally and physically, and now there is something much greater to address. Something medical, something deep inside me, something that can’t just be exercised away.

During my fitness journey, I learned a lot about how everything in my life starts within. This whole antinuclear antibody debacle, I think, is going to prove to me how true that is.

I haven’t felt sorry for myself during this. I don’t feel sick, other than being sick of not being able to see. 😉

I am a well person who just has a little bigger obstacle to tackle.

I’m seeing this as a way to practice my proactive theory about life – instead of a defensive approach, I am going into this with solutions in mind, asking myself what I should be doing, what TO do, to be better.

In what is easily the most-crazy physical/metaphysical battle I’ve ever experienced, I have to figure out how to nurture and nourish myself, so that I can stop destroying myself! I have to go to the core and heal.

After doing so much mind and body work, I thought I had come a long way. But, it appears that there are new depths.

During my 84 day fitness experiment, I learned to love physical challenge again. I started to relish it, and considered it a mental victory when I realized how I could master my body.

Now, I’m sure I have to learn to love emotional challenge just as much. Just like I learned to relish the discomfort of a long run, I’m going to have to face some uncomfortable emotions. I’m going to learn how far I can push myself mentally, all while giving my body the things it needs to heal.

If I said I was scared, I would be lying. But if I said I wasn’t, that would also be a lie. I am afraid of uncertainty, the physical repercussions of whatever is happening inside of me. But I know now that I can just deal with whatever happens & make the best of wherever I am. Some of the folks in my life have already given me so much strength, from my partner to my best friends to my grandma. They have let me know I am NOT alone. And this has even helped me soften up in the days since my diagnosis, having to depend on others – especially Jelaine – and having them come through for me has been a real relief and departure from my comfort zone.

It has been an unusual few days, trying to process this news, not being able to go about my life as usual, and trying not to be afraid of this unseen and unknown threat. I don’t know what the future holds, but I know this: The only thing I can control are my own actions.

I am pursuing wellness.

However I can achieve it, I have to explore the ways to make myself better, love myself mentally and physically, and BE well.

If you want to include me in whichever positive activity you participate in, I appreciate it.

If you are also +ANA, please contact me – we can swap stories, make t-shirts, discuss ways to feel better, or whatever.