On the second night of the camping trip, Jelaine and I had already been settled into the tent for a couple hours after sunset when my ears perked up. . . Were those footsteps I just heard?
My pause was barely noticeable, and the conversation continued without interruption. We even settled in enough to start drifting off to sleep. However, the next rustling was closer and more distinct.
I sat up.

Jelaine assured me that it was nothing, and we settled back onto our sleeping bags.

Just before drifting off, we were shaken awake by a shockwave of sound — SNARL!! — from the patch of rustling bushes right outside the tent. A screech answered the snarl, then the two combined in an audible portrayal of the fight separated from us only by a thin, canvas wall.

Jelaine and I sat bolt upright in the darkness. Silence and stillness lasted for a beat, and we were fumbling to find at least one of the flashlights stored around the tent.

I grasped toward my backpack, and heard Jelaine’s hand swish over her sleeping bag, away from us and toward the sound. The next sound *click* bathed us in light.

“Where’s the knife?” she breathed, holding the big yellow Eveready steadily at her side.

I reached into the front pocket of my backpack where there was a small LCD flashlight and the knife I carry in potentially-threatening situations (camping, jogging, walking around downtown). Jelaine grabbed the latter from my palm and slowly unfolded the blade — she meant business.

We listened a bit more as footsteps rustled through the bushes, towards the grill area, an area visible from the tent’s mesh upper.

We crawled to the wall and slowly unzipped the solid canvas and peered into the night. I pointed my flashlight in the direction of the last noise, but there was nothing to see. A light breeze blew through, cooling my skin and the tension. Jelaine relaxed and settled onto an elbow. She set the flashlight on her pillow, and we both shared a wide-eyed sigh.

We turned off the flashlights and laid back, letting our eyes adjust to the darkness as we stared at the tent’s ceiling. I couldn’t tell if seeing nothing was worse than seeing the source of our fright. It was tough to let go of that bone-chilling snarl. The knife rested between our sleeping bags. We continued to listen.

At some point, I drifted off. But sleep was anything but restful — I couldn’t find a comfortable position, every sound shook me into consciousness, and I could tell Jelaine was in a similar state as we passed each other in waking moments throughout the night.

Before I knew it, birds were chirping and the sun was just beginning to reach over the horizon. Groggy, I turned to face Jelaine who looked like she had already been awake.
“You sleep?”
“Not well.”
“Same.”

Apprehensive of what waited outside, I unzippsed the tent flap and peered out.

The site looked just like it did when the sun went down, a mask over the threat that had come from that exact ground only a few hours before. And without a visible threat, we became anxious to learn more about what caused such terror in Campsite 31.

I tapped my shoes against an exposed tree root, then stepped out of the tent and into them. Jelaine followed, and we nodded in wordless agreement to split up and find clues about our nighttime invader.

She took a trail toward the direction of the snarl that initially plunged us into fright while I went toward the grill and fire pit. My mind was caught up in thoughts of all the animals that lived on the Refuge, and I had a physical shock when Jelaine hollered:
“I found our chips!”

We both started to laugh. The tension was broken as we joked about the snarling beast having fiery diarrhea from the jalapeno chips we discovered were missing the previous afternoon. She held up the torn bag and made a joke about critters loving the spicy snacks as much as we did. 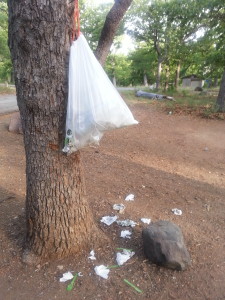 Coming up on the grill area, I saw clear evidence of our intruder and returned to the tent to grab my camera.
Jelaine joined me as we returned to the grill where there were footprints in the soot from the fire where we had cooked dinner.

The cooler provided an abundance of clues about our unseen intruder: 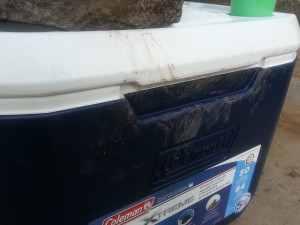 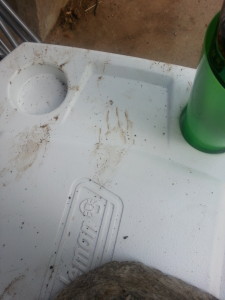 Jelaine and I breathed easier, and quickly switched from nervous to amused by the idea of a chip-eating Wile E. Coyote goofily traipsing through our site. We high-fived over our savvy rock usage — a heavy rock on the cooler, so simple, yet so clutch! Then got changed and headed to the informational center to compare the prints from the cooler with the booklets the Refuge offered. The evidence pointed toward a coyote, however we were unable to determine its partner in the brawl that had set off this entire chain of events.

What’s a camping trip without a little heart-racing nature action?!