Watching the host walk off set during The Broadcast’s debate on the Michael Sam kiss, I noticed that Courtney Kerr kept referring to homophobic comments/actions as “racist.”

I quote:
“It kinda comes off as being racist toward homosexuals.”

It made me chuckle, well, because I knew where she was going, but she just… couldn’t… seem… to… get… there…

Her inability to find the right term gave me an idea for a new term for prejudice-against-gays: 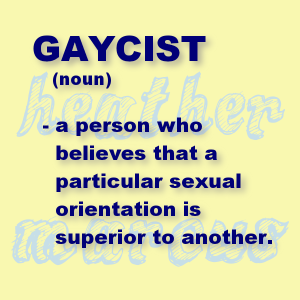 And a GAYCIST would be a person who adheres to such an idea.

Let’s give bigotry a new name.

[Read this with a smirk. That’s how I wrote it.]