In the name of [insert who/what you believe in], please stop harshing my buzz.

Muslim. Christian. Scientologist. Whatever. . . It just feels like people are just using their beliefs to rationalize whichever form of bigotry they want to practice. It’s gross. And I’m pretty sure nobody ever said to cherry-pick their teachings in order to find ways to be hateful; correct me if I’m wrong, but the figureheads are examples of how TO act. . . did I miss something?

Actually, yes, I missed a lot.

Growing up with a Christian family who belonged to a church with strict ideals, I missed out on a lot of tolerance and religious education. And I know for-sure that I missed a lot during Sunday School, mainly because I was too busy trying to figure out some answers I had about a few things regarding man-eating whales (okay, “big fish”) and resurrection and why the heck my Catholic friend thought the stale-ass bread the preacher’s son and I would sneak out of sermon to eat was the *actual* body of Christ. . .

Some of those kids in Bible class were sold whole-hog, but I was like, “Whoa, I would like more information on this,” because it sounded awesome & Jesus seemed like a good dude, and a better understanding (or maybe some backstory – How short WAS Zacchaeus exactly?) would have put me right on board.

But I didn’t get that. I got this: “You’re a bad Christian for not believing.” “If you ask those questions, it means you don’t have faith.” And that was from the adults.

For a long time, I was upset about religion and peoples’ participation in it. But I realized that I was just as *bad* for being down on them as they were on those who have different beliefs. 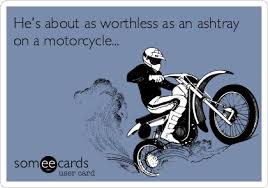 Everyone has their own belief system. The semantics or afterlife or facts don’t make an impact when something is so ingrained in a person’s identity–it’s why the creation/evolution debates or “what if there’s one big god and all the religions are looking at Him” discussions are like an ashtray on a motorcycle. . . But, the dedication people have is something to be admired and some of the things people do in the name of their religion are genuinely good.

But what I can’t jam with is the people who don’t live by their beliefs, except when they can invoke them to argue against something. The biggest example of this is “gay marriage.” If I hear one more person say the word “Leviticus” in their argument against marriage equality, I might run blindfolded onto the highway.

More and more, Religion is being used as a weapon. And that’s the polar opposite of what I’ve considered its intended purpose. Pretty sure being a closed-minded bigot is nnnnnot one of the WWJD characteristics.

My experiences have taught me more about the nature of love than church ever did. As a Constitutional scholar, I will equally support rights regarding marriage and religion and their integration in American society. Learning about religions as an adult and expanding my understanding helped me see that the main message of all of them is a positive one, and that quite a few people I’ve gotten to know have been positively affected–that’s really great.

I think the moral structure provided by some religions is great. I think some people go too far or aren’t genuine, but that’s life. I can’t begrudge someone else their beliefs just because I see them differently. Doing good or bad is MY choice & the consequences are my own to deal with, not compelled or judged by some outside source. I want to do good because that’s my choice, and I’m going to do good things in the name of humanity.