It’s time that we say “toodle-loo” to gay marriage.

No, not the union of two people with the same “bathing suit areas,” but to the term: GAY MARRIAGE.

I’ll let this joke set it up: 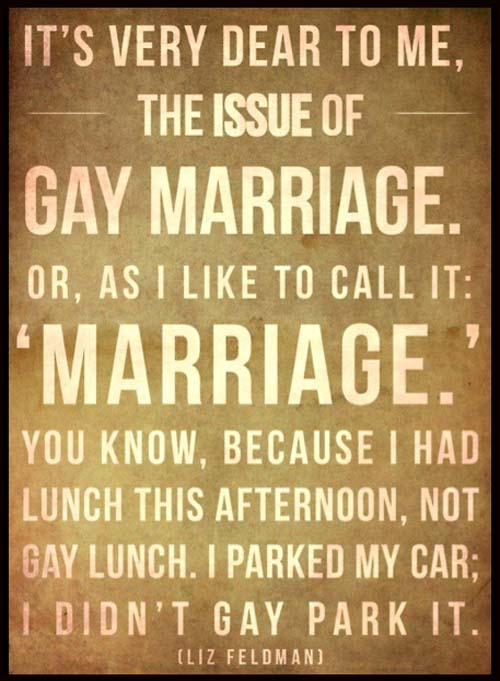 “Gay” is becoming part of everyday life, and it’s becoming more and more clear that us LGBT folks grocery shop, have relationship arguments, listen to music, pick our noses, drive our cars, see a man about a horse, sit in traffic, enjoy a cuppa on a cold day, squint when it’s sunny, break up and make up. . . just like everyone else.

Surprise, surprise – sexuality doesn’t make a person different. Humans are humans and, until there is some evolutionary  jump, we’re all pretty much the same.

And it’s time the terms we use reflect that.

Marriage equality has taken major strides in recent months, and it looks like there are more changes on the horizon, considering recent lawsuits and court rulings in Texas and other historically-“conservative” states.

Marriage is marriage. It’s two people committing to each other, for better or for worse, til they get old and wrinkly and can’t even use the parts that cause discrimination.

Also, this and ESPECIALLY this.

Ideas to Help You Overcome Obstacles
This one goes out to @jeljelaine, making this #juicefast just a little more tolerable...