After learning about Project Success a few days ago, I was so inspired at how much they care & felt compelled to do something to help.

I decided to collect some of the *stuff* that I don’t use – frames, craft materials, etc – and donate it to them.

Luckily, there was a cardboard box left in my storage closet!

So, the adventure began! I went through old boxes (a teenager can probably do something MUCH cuter with frames and mirrors). I opened drawers and took inventory of what I have extra (seriously, why do I need two hole-punchers? I barely use ONE!). I took a hard look at what I haven’t used in awhile, and pulled out the things that could serve Project Success.

After awhile the box was filled!

It feels good to know that these things will be put to good use, and it’s nice to hope that maybe one kid will get a boost by participating in Project Success and that something I gave can assist in that.

Also, I saw on their facebook that some of the kids’ paintings are on display in Arlington – how neat and exciting for them!

UPDATE: A quick message to Project Success later, and I learned that they run the program on Tuesdays nights from 5:30 to 7:30, and that I can take my donation to them then. Otherwise, they have to organize a day/time to take donations.

I’m jazzed for Tuesday. And Pax is, uhh, guarding the donation box til then. 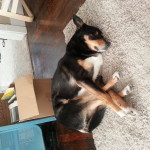